The Club is open to all to join, whether or not they are Humber owners and whatever the condition of any Humber they may own. The Club appreciates that many members may be involved in long term restorations of their car or indeed it maybe in everyday use and in consequence the Club's outlook on presentation is muted. The social involvement of members is seen to be of equal standing.

Currently the Club has in excess of 500 members operates through an elected Committee on a nation-wide basis and indeed has spread to an international membership covering many European countries, the Americas and Australasia as well as more limited representation on all continents. Nationally, the Club encourages the formation of autonomous Local Groups where members meet together to discuss matters of common interest associated with Humber cars and the promotion of their ownership.

A bi-monthly magazine called, 'Old Faithful', gives information about Club activities both on a national and Local Group basis as well providing a forum for the exchange of views, technical and social experiences. Additionally, the magazine carries adverts of Cars for sale and wanted and similar adverts for spares, both private and trade. A range of Regalia in support of the Club and the Humber marque is stocked and availability is detailed in the magazine.

Online the Club has encouraged the use of Facebook for Humbers owners worldwide.

In view of the Club's long association with the marque a substantial archive of technical publications, original publicity material and memorabilia has been assembled, this is available for examination by members by prior arrangement, copies of much of the archive can be made available for little more than cost and occasionally duplicate or surplus items are sold off.

Membership gives access to technical advice based upon members knowledge and experience backed up by Workshop Manuals and a Spares Advisory service. The Club does not hold stocks of spares as the range of cars covered exceeds 20 distinct models, however limited re-manufacture is undertaken from time to time when no known sources of crucial parts are known to exist. The Club's contacts with specialist Rootes car spares suppliers can usually source mechanical parts either new or second-hand, reconditioned items are also often available through specialists.

Preferential Insurance terms are available to members negotiated on their behalf. Members have access to an Insurance Company approved team of valuers who give assistance in determining actual and replacement values.

Registration Number recovery, the DVLA has a scheme with car clubs to deal with this and we in the Post Vintage Humber Car Club are authorised by them to make the enquires and obtain and complete the relevant paperwork. A physical examination of the vehicle may be required.

An annual International Rally is organised usually over a mid-summer weekend at locations spread across England such that the changing venues give reasonable opportunities for members to attend. The accent on these occasions is on the social aspects of ownership rather than the competitive although a self-judged concours is held as a part of the weekend activities. In addition the Club supports a range of Classic Car Shows at major and minor centres through the year to heighten awareness of the survival of the Humber marque.

The Post Vintage Humber Car Club was formed into a Limited by Guarantee Company on the 2nd January 2007 and registered at Companies House, Cardiff - number 06039320. 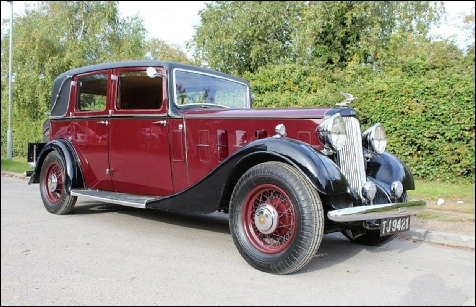